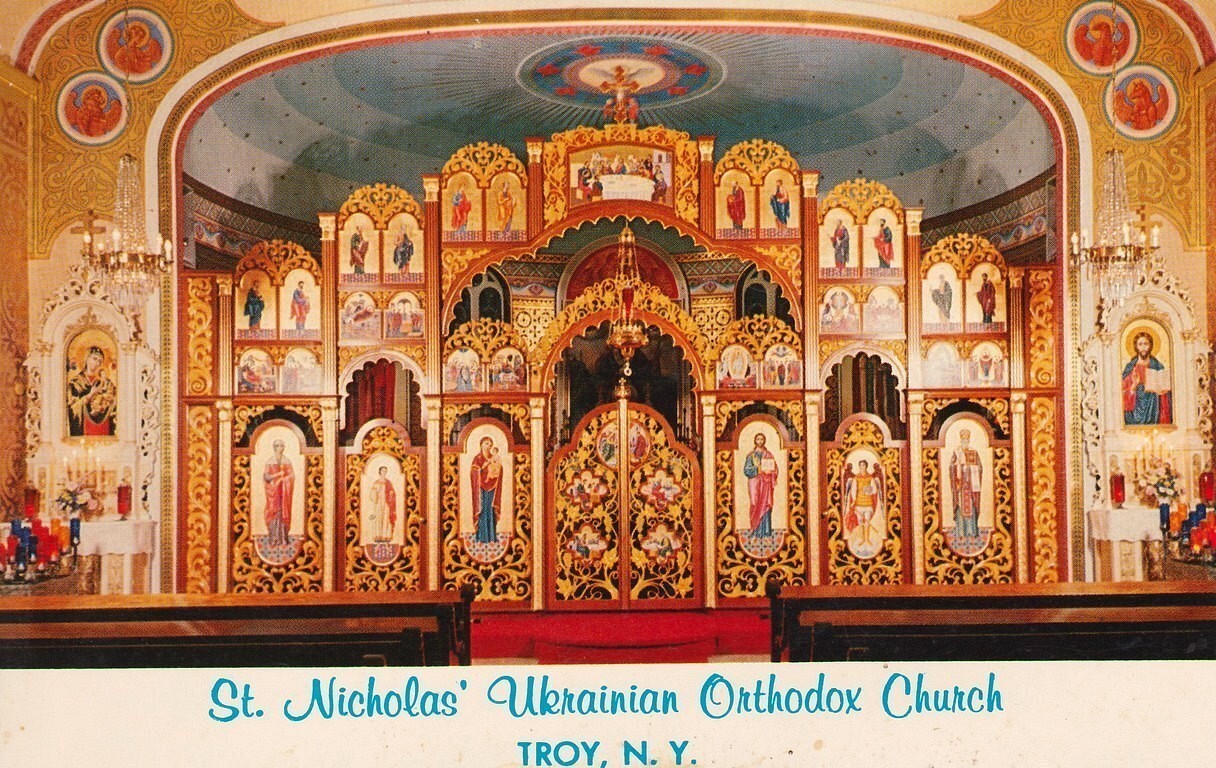 St. Nicholas Ukrainian Orthodox Church was founded in 1897. Our father among the Saints Nicholas of Myra, Wonder-worker, was the Archbishop of Myra in southern Asia Minor in the fourth century and is also the basis for the Sinterklaas and Santa Claus legends and imagery which accompany Christmas celebrations in much of the world. While widely honored and venerated, not only in the Orthodox Church, but throughout most Christian groups, little is known historically of the life of Nicholas. He is known to have been archbishop of Myra and he may have participated in the Council of Nicea in 325, and was known for his compassion for the poor and needy. All kinds of myths and legends have grown up around the story. Some say he was born to a life of wealth and privilege and that he forsook his position to take care for the lowly and downtrodden. Sailors believed his prayers kept them safe on the high seas. Children look to him as their patron saint their protector and provider. Some say Saint Nicholas performed miracles and there are numerous accounts of his kindness and generosity. Perhaps the most famous story involves three sisters who live in abject property. They were about to be sold into slavery for the sake of their family survival. Saint Nicholas anonymously supplied money for their dowry so that the girls could be married instead. In addition to being honored as the patron saint of many countries, notably Greece and Russia, and of cities, he is the patron of many occupational groups, most notably of sea-farers. (Sources: Orthodox Wiki and Bronner’s CHRISTmas Wonderland.)

Our church history is quite colorful. Starting with the mass immigration of Ukrainians to America to today’s Ukrainian Americans and now a new wave of current immigrants from Ukraine. The Ukrainian people came long distances, across the ocean, to seek their destiny in the United States. It was not an easy venture, but when they set out on their travels the anticipated good fortune overcame their fears. Arriving in America, they began a grim and rough life, but they were finally a free people. The better life, though there were hardships to overcome, seemed attainable in America, the land of freedom and opportunity. The city of Troy, NY in the 1800’s was famous for its mills and foundries. In those days, Troy was in need of laborers for the available heavy industry. In the year of 1886, the first Ukrainian settlers came, mostly from the western part of Ukraine: Ternopil, Horlyzi, Synk, and Lisko. During the first years the immigrants endured hardships. A “ghetto” way of life prevailed in America as people of one nationality of another grouped together into particular sections of town. But the Ukrainian people were, and remain religious, Christian people. St. Nicholas Ukrainian Orthodox Church was established in 1897, and now, over 100 years later, we celebrate our wonderful parish and our American citizenship.

We want to thank all of the wonderful priests that have been here at St. Nicholas Ukrainian Orthodox church.

1897-1902 – Father Nestro Dmytrow. Reorganized the parish and under his direction bought the old Methodist church on the corner of Third and Monroe.

1903-1906 – Father Dobrotwor. Under his stay, land for the church cemetery was purchased on the boundary between Watervliet and Maplewood.

1913-1914 – Father Nicholas Prodan. Took the responsibility to head the collection for funds needed to begin construction of the new church.

1934-1935 – Father Dmytruk. Under his guidance, construction of the church hall on Second Street in Troy began.

1953-1968 – Father Myron Pacholok. In 1954, the “Burning of the Parish Home Mortgage” and the blessing of the newly constructed classroom in the basement of the church. The Dedication of the Ikonostas and Church Interior was completed on September 27, 1964.

1968-1972 – Father Theodore Buggan (the late Metropolitan Constantine). Instituted and organized the annual international arts festival and the Festival of Nations. (Click here for the official press release on his passing in 2012.)

1981-1999 – Father Wolodymyr Paszko. Father Paszko served Saint Nicholas church for over 18 hard working years. He traveled from Elizaville to Troy every weekend, never missed a single service in all of his years at Saint Nicholas, and was always spiritually uplifting to all parishoners. He and his late brother, Fred Paszko, worked endless hours maintaining and repairing the church, church hall, and helped tremendously with monetary gifts. Under his guidance and leadership, the church was repainted and flourished, with many altar boys serving on any given Sunday. Father Paszko and his family are also responsible for restoring and reopening St. Michael’s Ukrainian Orthodox Church in Hudson, N.Y. and for building a church in Ukraine in the village where he was born.

Present – Father Vasyl Dovgan. Father Vasyl and his family have been a shining Light as Saint Nicholas prepares for growth, and welcomes the next wave of Orthodox Ukrainians to New York and the Capital Region.

Celebrating the 50th Anniversary of the Ikonostas

The Baptism of Ukraine – 988 A.D.
(Painted by Ivan Denysenko)

In the year 988 Ukraine became a Christian nation, under the rule of St. Volodimir the Great, the grandchild of the Grand Princess St. Olga. The Greek Orthodox Faith was accepted as the religion of the State. It is said that Volodimir was dissatisfied with the heathen religion and was for a long time uncertain as to which faith he should accept for his people instead; whether the Mohammedan from the Bolgarians who lived beyond the Volga, or the Jewish from the Khazars, or the Roman from the Germans, or the Greek from Byzantium, for missionaries from many lands came to Volodimir to plead the merits of their respective faiths. All were refused. Volodimir then decided to find out for himself which was the best religion. He sent out envoys to many lands to gather information and report to him. Those sent to Constantinople found Greek Orthodoxy the best. The boyars also said: “The Greek religion is clearly the best, for it was accepted by your grandmother Olga, who was the wisest of all people.” When the envoys returned, they approached Volodimir and spoke in joyous unison: “Nowhere is there such faith as among the Greeks. While we listened to and viewed services in Constantinople, in the church of St. Sophia, we did not know where we stood – in heaven or on earth.” Volodimir then agreed to accept the Greek Orthodox Faith, but he was too proud to beg for baptism from the Byzantines, preferring to gain by his victories the right to demand it. He then attacked and conquered the Greek cities in Crimea. Made bold by his conquest he sent an embassy to the joint Byzantine emperors, Basil and Constantine, to demand their sister, Princess Anna, in marriage as a condition of peace. The emperors accepted his proposal on condition that Volodimir be baptized. His reply was that he would gladly accept Christianity, as he had already been favorably inclined to us. Princess Anna was then sent to Chersonesus a Byzantine colony in Crimea but the ceremony was delayed due to the fact that Volodimir was suffering from inflammation of the eyes. The princess tried to persuade Volodimir not to delay the ceremony, for as soon as he accepted Christianity he would be healed. She did succeed in doing so and Volodimir was baptized and his eyes were miraculously cured. He then married the princess. Upon his return to Kiev, Volodimir took with him several Greek Orthodox clergy to baptize the people of Kiev and the rest of the country. The Kievan Chronicle declares that when Volodimir returned to Kiev from Crimea he ordered all the pagan idols and the statues of the pagan gods on the hills near his palace destroyed. The chief idol, Perun, was tied to a tail of a horse, dragged through the streets and finally thrown into the Dnieper River. Volodimir then commanded the citizens to appear at the river bank on the next day. After they had gathered all were ordered to enter the river. The priests stood alone on the shore and read the baptismal liturgy, and thus the entire city was made Christian. Similar mass baptisms were performed in many other cities. Under Volodimir’s protection Greek Orthodox Christianity spread rapidly. Churches were built and priests were appointed to take charge of education. Greek craftsmen were imported to build and decorate the new churches and masters of many trades were immigrated. Byzantine learning, especially that connected with the Church began to take root. The state became officially Christian. The Ukrainian nation was consolidated by a new Faith, by the Church organization, and by priestly hierarchy subject to the Metropolitan of Kiev.

Saint Andrew the Apostle – On the hills of Kiev
(Painted by Ivan Denysenko)
During the early years of the Christian era, Christianity had already begun to expand to the coast of the Black Sea and the lower Danube area. It was then carried northward by merchants and travelers, who ventured into that land for purposes of trade and adventure. In the course of the ninth century we find Christianity well rooted in the more commercial cities of Ukraine. The influence of the Byzantine culture could undoubtedly be found in these Ukrainian cities. Greek Orthodox missionaries who had been sent to Ukraine, baptized many of the people living there. A Greek bishop was later sent to care for the needs of these new Christians.
It is generally believed by many Ukrainians that St. Andrew the Apostle had once traveled through Ukraine. In his travels it happened that he stopped to rest in the very place where now stands the capital of Ukraine, Kiev. Looking upon the countryside he said to the followers: “Do you see these hills? Look at them; for upon them will shine the rays of God’s grace. Here will be built a great city in which God will place many churches.” After St. Andrew had proclaimed these words he went upon one of these hills, blessed them, and placed a cross upon one of them. A great city was built upon these hills, containing many beautiful churches, and from it did shine the glory of God upon all the land, as the Holy Apostle had prophesied.
Powered by Orthodox Web Solutions
Home | Back | Print | Top